The XM8 LMG is a variant of the XM8 baseline carbine; it has a heavy 20 inch (508mm) barrel for sustained fire and increased accuracy, integrated folding bipod, built-in 4X Reflex Sight, and a 100-round Beta-C magazine. This variant of the baseline carbine is meant to be used as a light machine gun rather than an ordinary assault rifle such as its long barrel (LB) XM8 counterpart or the M16 assault rifle.

The XM8 LMG is a light-machine gun featured in Battlefield: Bad Company.

The XM8 LMG can be found on the missions Crash and Grab and Ghost Town as a collectible. It is also used by Legionnaire Mercenaries during Ghost Town.

The XM8 LMG is issued to the Support as an unlockable, costing one unlock point. It has a 150-round drum magazine and 300 rounds in reserve. It has a good rate of fire and power, but is very inaccurate. The crosshairs grow large as soon as it is fired from the hip. It can kill in around 10 shots. When playing in close-quarters with the Support kit, this weapon is probably a better choice than other LMGs due to being magazine fed, allowing for a faster reload, and its decent damage, high rate of fire, and its low accuracy won't make much difference at close ranges.

The XM8 LMG in Battlefield: Bad Company on the multiplayer map Valley Run.

"An LMG version of the XM8 modular assault rifle. It's capable of firing 750 rounds/minute. Fitted with a 100 round magazine and equipped with a bipod and built in scope, this LMG fills the tactical gap between assault rifles and GPMGs."

The XM8 LMG is a light machine gun featured in Battlefield: Bad Company 2. It is the 5th light machine gun issued to the Medic kit, requiring 34,000 points to unlock. Its design differs from the XM8 Prototype, as outside of desert maps, it has a black finish instead of a grey-black scheme the XM8 has. It has relatively high accuracy and a high rate of fire.

Like the MG36, it has a 100-round Beta-C magazine. This makes the reload time shorter when compared to other weapons of its class, although for gameplay balancing purposes, the player takes their time while reloading, dragging it out for longer than necessary.

Its performance in close quarters is good despite its large crosshairs as its high rate of fire and large magazine can spare a few shots to miss. At longer ranges, burst firing is recommended as it has a lot of recoil and deviates easily.

Its main advantage over other LMGs is its quick reload, but since the MG36 has the same reload speed and a built in Red Dot Sight, players tend to stop using this gun when they unlock the MG36. Players who may find the Red Dot Sight obsolete might prefer the XM8 LMG over the MG36, as the XM8 does offer peripheral vision, and boasts relatively simple and clear iron sights. 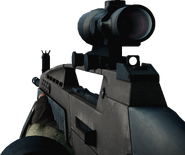 The XM8 LMG at White Pass in Conquest. 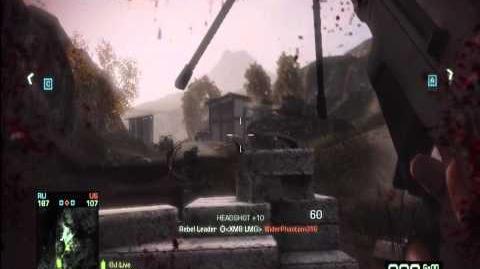 The XM8AR is a weapon featured in Battlefield Play4Free. While not as powerful as purpose-built LMGs, the XM8AR is very accurate and comes with a quick change Beta-C drum magazine. Its performance is easily comparable to that of MG36 with the exception of slightly less damage but better range, less recoil and higher accuracy.

The XM8's sights closely resemble the M16A2's sights. It uses a 3 pronged sight whch is well designed to line up enemies easier than other LMGs. The sights do not actually affect the rifle's performance but some players find it much more easier to line up targets with the XM8's 3 pronged sights compared to other LMG's such as the MG3 or M60.

The XM8's sights are very thin, therefore making it much more easier to counter players with longer ranged rifles, but this is a double edged sword as the sight are so thin, when aiming at a dark or shady area the sight tends to blend in unless you concentrate. Overall the sights are excellent in any situation and if you can get used to the cons of the sights, the XM8's sight will prove to be excellent.

It's extremely effective from close to long ranges, especially long ranges due to it having the best range out of all the LMGs and having very low recoil. This gun preforms the same as most other LMGs in close quarters due it having the same fire rate as everyone else.

The Stats and Description of the XM8AR in Battlefield Play4Free

The XM8AR as it appears in-game

Default Underbarrel
Bipod
"The LMG version of the XM8 has its capacity increased to 100 rounds."

The XM8 LMG is a weapon featured in Battlefield 2042. It is available exclusively in the Battlefield Portal for the BC2 Medic. It functions in a similar manner to its counterpart in Bad Company 2.