Y-Lighter is a Codex Entry featured in Battlefield 1, introduced in the Battlefield 1: In the Name of the Tsar expansion. It is unlocked upon obtaining ten kills with the Y-Lighter. 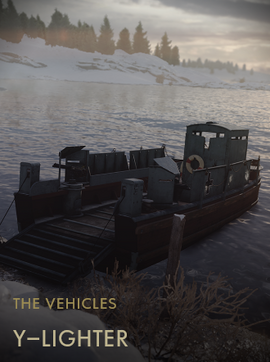 "Lighters” were box-like barges with spoon-shaped bows. They served as landing crafts. Unlike the larger X-class, the Y-lighters were specially designed to solely transport the infantry and its equipment to shore, in groups of 50 to 80 men. Built out of steel or wood, Y-lighters were towed, steered by oars, or propelled by gasoline-powered outboard motors. The basic lighter provided only a minimal amount of cover but because of its shallow draught could come directly to the shoreline. Y-Lighters were developed initially by the British for the amphibious landings at Gallipoli in 1915 and continued to transport infantry throughout the Mesopotamian campaigns. All nations used similar barges during amphibious operations.

Retrieved from "https://battlefield.fandom.com/wiki/Y-Lighter_(Codex_Entry)?oldid=343301"
Community content is available under CC-BY-SA unless otherwise noted.