Zeebrugge is a Codex Entry featured in Battlefield 1, introduced in the Turning Tides expansion. It is unlocked upon winning one round on Zeebrugge. 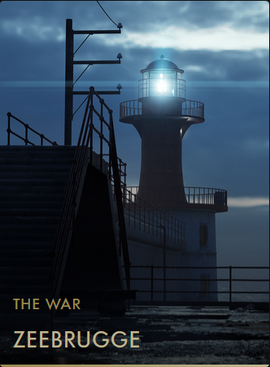 Most dangerous for the British war effort in the North Sea were the German submarines, minelayers, and torpedo boats that were launched from Bruges in German occupied Belgium. In its protected harbor, these vessels made their way through the canal and exited into the North Sea via the ports of Zeebrugge and Ostend. The German defenses had four batteries of heavy guns with a range of 41 kilometers, and many smaller mobile artillery guns dominated the Belgian coastline. Aditionally, the German Flanders Marine Corps was stationed close by and ready to engage at all times, but the allies planned to block or destroy the locks at Zeebrugge, and end the German submarine threat once and for all. The plan of the operation, which would be known as the Zeebrugge raid, was to silence the coastal batteries and then scuttle several concrete-laden cruisers at the entrance to the canal. On April 23rd, 1918, two of the three scuttle ships were sunk in the canal, but they were sunk in the wrong place and after a few days, German submarines were back in action.

Retrieved from "https://battlefield.fandom.com/wiki/Zeebrugge_(Codex_Entry)?oldid=343370"
Community content is available under CC-BY-SA unless otherwise noted.